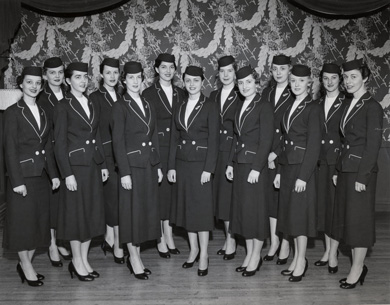 Upon graduation from “smile school” Bonnie Murray and I sashayed into The St. Paul Hotel restaurant for lunch, eager to be seen in our brand new and hard won stewardess uniforms. Navy blue and trimmed with white piping, our jackets featured a sweeping open collar over a snow white blouse. The jacket was cinched at the waist with two large white buttons over a slightly flared peplum, emphasizing the pencil slimness of the calf length skirt. Shiny new wings decorated hat and breast. Crested by a navy blue campaign style hat and striding (thanks to a generous slit in the skirt) to our table in four inch spike heels, we believed ourselves to be Grace Kelly incarnate. We lingered over lunch, loath to go home where we would be obliged to hang up our uniforms and begin the interminable wait on reserve, the only schedule we lowly beginners could aspire to.

Flying the reserve schedule one could easily find oneself on the workhorse aircraft of the airline, the DC-4. We’re talking no frills here, folks. Four engines? Yes. Two abreast seating? Yes. Pressurized? No. Air conditioned? No. Unless of course you count the small metal fans mounted on the open bays of the overhead racks. Yes, the overhead racks were open, but there were pillows and blankets in those overhead racks, noticeably absent today. Now listen carefully. Here’s where the chicks come in. It was routine to open the cockpit door on a DC-4 and be greeted by a cacophony of cheeping loud enough to compete with four roaring aircraft engines. Crates of baby chicks nestled in the radio racks, basking in the warmth of the dozen or so radios stacked floor to ceiling just aft of the pilot’s seats. The precious cargo was on its way to a waiting farmer in Rochester MN or Madison WI. Chic . . . to chicks, overnight. Tell me, people, can you picture Grace Kelly here? 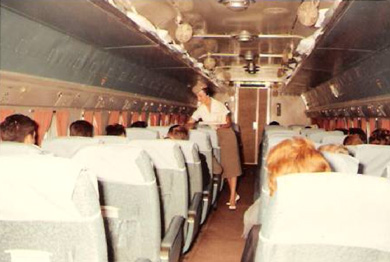 Nancy Rogers on the DC-4. Note the fans on the overhead racks.

A month on the vomit comet -or- not all aircraft were Stratocruisers.

It is a steaming July day, made more so by the long hot trek across the shimmering tarmac to board the airplane headed for Seattle. Once aboard, passengers gaze wistfully at the small idle fans fastened to the open overhead racks every couple of rows of seats. Relief won’t come until the four propeller-driven engines start up, one by one, and the DC-4 shudders into life – also sending power to the slim, 6 inch fan blades inside the aircraft. Taxiing to the runway the little fans are noisy and their effectiveness is minimal. Once airborne their noise is absorbed in the greater sounds of the engines, and relief is still a dream to hot, sticky bodies.

The DC-4’s valiant and colorful history was unknown to many of us working on her in the 1950s. Identified by her military designation, the venerable C-54 dominated the Berlin Airlift during the Russian blockade after WWII and served as the first Air Force One, code named Sacred Cow, for President Franklin D. Roosevelt. But by my time her glamour had faded considerably.

The vomit comet, otherwise known as NWA 101, began its cross country slog in Chicago with stops in Milwaukee, Madison and Rochester before reaching Minneapolis where I got on. From MSP we continued westward, stopping in Fargo… Jamestown… Bismarck-Mandan… Billings… Butte… Helena… Missoula and Spokane before mercifully landing in Seattle. Did I happen to mention the DC-4 was not pressurized? We were not certified to fly over 10,000 ft with passengers aboard. This meant flying through, not over, the Rockies. Coming into Butte one day under IFR conditions (Instrument Flight Rules) and feeling the airplane bank steeply under my feet I clawed my way up the aisle to the cockpit to inquire. Once inside, and noticing the white shirts of both pilot and co-pilot transparent with sweat, I quietly backed out. I figured they could spiral our aircraft into Butte perfectly well, avoiding mountains on all sides in pea soup visibility, without listening to me whine.

Passengers on the vomit comet included military spouses and their kids going to the air force base in Spokane. Kids = diapers, bottles, ear aches and general pandemonium. Even with those little fans on the overhead racks spinning their hearts out, a summer thunderstorm while weaving through the Rockies was guaranteed to light up call buttons like a Christmas tree. Warm barf bags thrust in your hands in this gyrating metal cigar only added to the ambiance.

We bid for our flight schedules each month. There were many factors to consider when bidding a schedule, but destination was key; spring in Washington DC while the cherry blossoms are in bloom, New York in the fall for new Broadway shows and shopping, Florida in the winter for obvious reasons. In the summer, when the weather is great in Minnesota, two-a-day Chicagos had you working only 12 days a month and home every night. So why in the world would anyone in their right mind bid the vomit comet? I only did once. Once, in my four year career. Still, what was I thinking?

Although the lake was, and still is, located not far off the end of runway 29 Left at Wold Chamberlain Field, now Minneapolis St. Paul International Airport, the odds of an airliner actually ditching in Lake Nokomis were slim to none. However the CAA (civil aeronautics board, forerunner of the FAA) required twice yearly ditching practice exercises of all crew members of airlines which flew overseas. Ergo, mandatory ditching practice in landlocked Minnesota, a minimum of 1500 miles from either coast.

Lake Nokomis did feature a parking lot and a public dock, which made it easier to drag the heavy 20 man raft out of our van and to the end of the dock. I don’t remember much about the inflating part. I suspect most of the heavy lifting was done by our intrepid safety instructor, Al Baird. Exactly how all this would translate to an actual emergency was then, and remains now, quite beyond me. Soon 12 of us, sans instructor, were afloat in our banana colored craft, taking turns manning the paddles. I do remember that getting back to the dock was no piece of cake due to our mostly circular trajectory. Our heroic (?) efforts were captured by a Minneapolis Tribune photographer, no doubt at the invitation of the NWA public relations department. 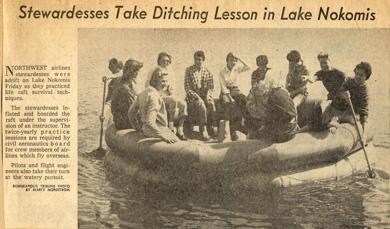 Yours truly, second from right, is pointing the way (heaven help us).